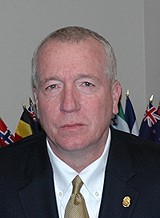 Jack Riley was the Special Agent in charge of the Chicago Field Division, the highest ranking special agent in Chicago. He directed all enforcement and administrative activities for DEA operations in five states.  Jack is best known as the lead investigator for the team that brought down drug kingpin Joaquin “El Chapo” Guzman.

The team at the DEA, under the leadership of Jack, untangled the web of drugs, money and corruption that had allowed El Chapo to become a billionaire and a very dangerous man.  El Chapo isn’t the only drug kingpin that Jack has been watching for years.  Jack wants you to know that the Pharmaceutical Industry has its own remarkable level of corruption, corruption that is attempting to quiet the debate over opioids and opioid legislation.