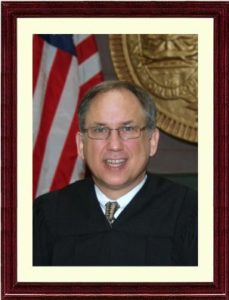 Judge Perry H. Gravely was born in Pickens, South Carolina in 1960. He is married to Kathryn Coleman Gravely who is the Director of Community Relations for Cannon Memorial Hospital in Pickens and they have 4 children.

After law school, Judge Gravely worked as an associate for Leatherwood, Walker, Todd and Mann, in Greenville, South Carolina before moving back to Pickens in 1992 where he worked for Acker, Acker, Welmaker and Johnson and later became a partner at the firm.  In 1995, Judge Gravely went into solo practice and started The Gravely Law Firm, P.A. where he worked until he was elected as Resident Judge for the Thirteenth Circuit (Seat 1) on February 4, 2015 and took the bench on April 13, 2015.

Judge Gravely also served as Municipal Judge for the City of Pickens from 2003 to 2015.  He served 2 terms on the South Carolina Bar House of Delegates, was named as a finalist for Pro Bono Lawyer of the Year (1989) and received the Bronze Compleat Lawyer Award from the University of South Carolina School of Law Alumni Association in 1995.  He has been very active in many civic and charitable groups in Pickens and Greenville through the years, including serving as Scoutmaster for Boy Scout Troop 51 in Pickens since 2004.