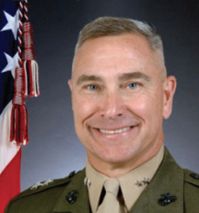 General Robeson will discuss challenges facing our veterans. You will not want to  miss this informative and important discussion.

A native of the Carolinas, Mastin Robeson served over 34 years on active duty in the US Marine Corps, during which time he served in more than 60 countries. He retired from the Marine Corps in February 2010.

• He served in Iraq as GEN Dave Petraeus’ Director of Strategy, Plans, and Assessments where he was responsible for writing and assessing the Crocker/Petraeus surge campaign plan.

• He served as Military Assistant to Secretary of Defense William S. Cohen.

• His final tour of duty was as commander of Marine Corps Forces Special Operations Command.

Since 2010, Mastin has been President and CEO of TRGSolutions, a consulting firm that has assisted more than 25 companies in business development, marketing strategy, strategic planning, executive leadership and decision-making, and crisis management.

In 2013 Mastin put his consulting work on hold to serve as President and CEO of Imperatis Corp in Arlington VA. Mastin also serves as the Chairman of the Board of a non-profit called Upstate Warrior Solution and as a member of the Greenville Health System’s Operations Council.

Mastin has been married to Nancy (his college sweetheart) for 39 years. They have four married children and seven grandchildren, and currently resides in Landrum SC.