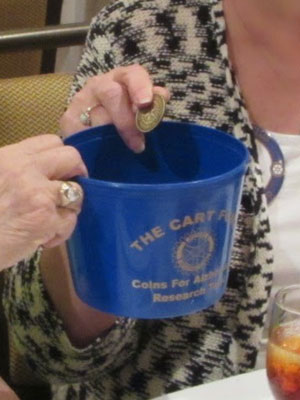 CART (Coins for Alzheimer’s Research Trust) began as a club level project in the Rotary Club of Sumter, SC in 1995. The Rotarian initiating this project was Roger Ackerman, who along with his wife had been caring for her mother who was diagnosed with Alzheimer’s in her early seventies and struggled with the disease for fifteen years. Roger knew that on any given day in America, billions in loose change passes among our citizens. He conceived the idea that if Rotarians voluntarily emptied their pockets of change for a good cause, we could produce significant levels of funding to support Alzheimer’s research.

In 1999, the American Federation for Aging Research began assisting CART with the grant process. The first research grant for $100,000 was awarded in 1999 to Dr. Allan Levey at Emory University. Over $4,250,000 in grant funds have been awarded since the program began. CART is a 501 (C) 3; therefore, all donations are tax deductible. Also, the bylaws of CART require that all funds received must be used for research grants, so 100% of donations that are raised by clubs and sent to CART are used for grants.  The grants have a two year term, and 25% is presented to recipients at the annual board meeting in May of each year.  The remainder is dispersed in six month increments.  More information about C.A.R.T. is available at https://www.cartfund.org

Volunteer for this Project