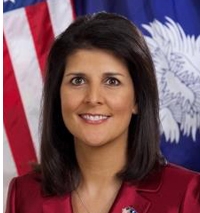 Born in Bamberg, S.C., the daughter of Indian immigrants, Governor Haley’s first job was keeping the books for her family’s clothing store – at the age of 13. She graduated from Clemson University with a bachelor of science degree in accounting and, following her graduation, worked as Accounting Supervisor for a private company and five of its subsidiaries. She then returned to the family business and helped oversee its growth into a multi-million dollar operation.

First elected to the General Assembly in 2004, her time in Columbia has been marked by conservative leadership and an unwavering commitment to protecting the taxpayer. For her efforts to cut taxes and slow the growth of government spending, Governor Haley was named “Friend of the Taxpayer” by the S.C. Association of Taxpayers in 2011. She received the 2011 State Leadership Award from the United States Chamber of Commerce.