US Congressman Trey Gowdy Addresses the Club, May 26 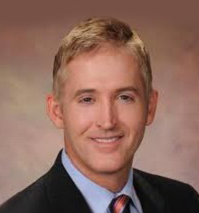 sents the Fourth Congressional District of South Carolina. He entered Congress in 2010 with a resolute commitment to the conservative principles that have guided him throughout his years in public service. In May of this year, Trey was named as the Chairman of the House Select Committee on Benghazi. He continues to serve on the House Committees on Ethics; Oversight and Government Reform; and the Judiciary, where he also serves as the Chairman of the Subcommittee on Immigration and Border Security.

Before becoming a Member of Congress, Trey served six years as a federal prosecutor and ten years as 7th Circuit Solicitor. He is a graduate of Spartanburg High School, and then went on to graduate from Baylor University with a degree in history and the University of South Carolina School of Law. Trey is married to Terri Dillard Gowdy, and they have two children: Watson and Abigail.